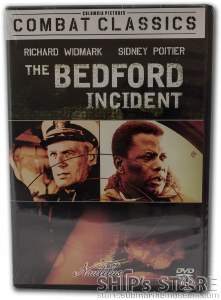 Nerve-wracking suspense surrounds the tale of a U.S. Naval vessel on a routine Nato patrol that ends up in a freakish showdown with a Russian submarine. Richard Widmark is Capt. Eric Finlander, the maniacal commander who drives his tense crew to the brink of nervous exhaustion. Sidney Poitier is Ben Munceford, a photjounralist aboard the Bedford assigned to record a "typical" mission. His moral indignation is put to the test by the captain's obsession with forcing the sub to the surface. Several crew members are at their breaking point as Finlander continues his prowl. Especially affected is a former German U-boat commander, now aboard the Bedford as a NATO observer, portrayed by Eric Portman.

This product has not yet been reviewed.

Please login or register to write a review for this product.