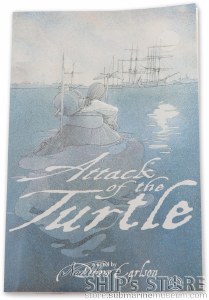 Book - Attack of the Turtle

It's 1776, and the Revolutionary War is raging. Fourteen-year-old Nathan Wade is a patriot, but he's too young to join the fight. Then his cousin David Bushnell comes to town with a secret. David has designed a water machine that can explode bombs underwater. And his mission is to launch it against British warships in the new York harbor. Nate agrees to help build the weapon of war - dubbed the American Turtle. Although he's terrified of water and worried about getting caught, when unlikely circumstances put Nate at the center of the action, he must face the murky waters of his fears head on. Based on actual historical events, this adventure story captures the drama of the first submarine used in naval warfare and the struggles of a teenager overcoming self-doubt.

This product has not yet been reviewed.

Please login or register to write a review for this product.